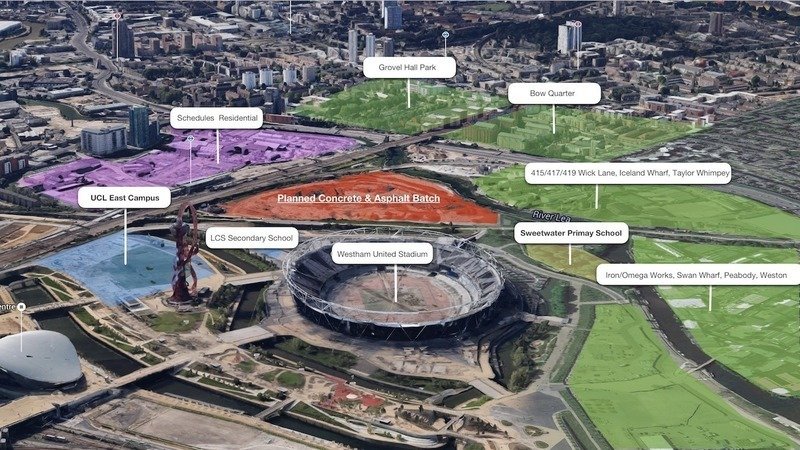 Last year a planning application was submitted for the creation of London’s largest concrete and asphalt factory – right at the centre of the Olympic Park, and in the middle of a dense residential area.

This development would have a dramatic impact on the local area and residents, creating 3 concrete batching plants and an Asphalt production plant adjacent to a heavily used green space.

The proposed plants, which will be next door to London Athletics and the new UCL East campus, are to run 24 hours a day, 7 days a week, with an estimated 900 heavy vehicles coming and going daily.

This will create an industrial blight on the area by introducing significant air, dust and noise pollution to what is otherwise a fast regenerating part of the city.

The planning applications have been submitted as four (4) wholly independent operations, without consideration given to their cumulative effects on an area now defined by new residential communities, pedestrian and cycling routes, recreational zones and athletics venues. There is a serious risk that hazardous chemical dust from concrete and asphalt manufacturing activities and associated vehicle fumes will raise air pollution to dangerous levels, resulting in asthma and other respiratory issues for the populations of Newham, Hackney and Tower Hamlets.

The proposal is scheduled for review before the London Legacy Development Corporation’s (LLDC) planning committee as early as September 27th 2016. The LLDC was given special powers and a remit directly from the Mayor’s office to manage the Olympic Park area regeneration beyond 2012.

The LLDC is not directly accountable to local residents in the same way that the councils of Newham, Tower Hamlets or Hackney are. Consequently, the decision making of the LLDC will not always be in the interests of local residents. And it is the LLDC alone that has the final decision on whether this concrete batching development goes ahead.

The proposal of the concrete works is completely incompatible with the Mayor’s office ‘Clean Air for London Policy‘ or the current direction of residential and other developments planned for the area.

In order to protect the integrity and future development of the community, it is of paramount importance that a concerted effort be made by local residents and businesses to oppose this planning proposal NOW.