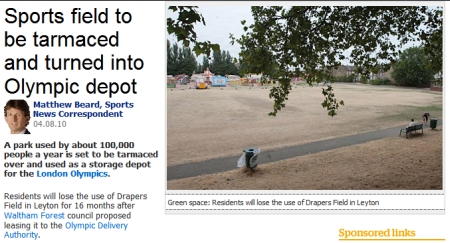 Leyton Liberal Democrats’ campaign to save Drapers Field from being tarmaced over has hit the headlines. The Evening Standard reports:

Park users, including the Norlington School for Boys and 23 clubs and teams, face upheaval as the council searches for alternative sites.

The chairman of governors at Norlington, whose previous pupils include former England cricket captain Graham Gooch and TV star Jonathan Ross, said the plans were “absolutely horrendous”. Stephen Pierpoint said: “It’s an amazing contradiction that in trying to promote sports they are preventing our pupils from playing sports.”

Leyton councillor Bob Sullivan, who leads the Lib-Dem group on Waltham Forest council, said he doubted the compensation would be satisfactory. He said: “It’s a disgrace. We’re supposed to be an Olympic borough. Norlington School for Boys uses the field four days a week and they are going to find it difficult to find somewhere else to go that is affordable.”

You can sign the petition to keep Drapers Field available for use as a sports field at http://ourcampaign.org.uk/DrapersField.